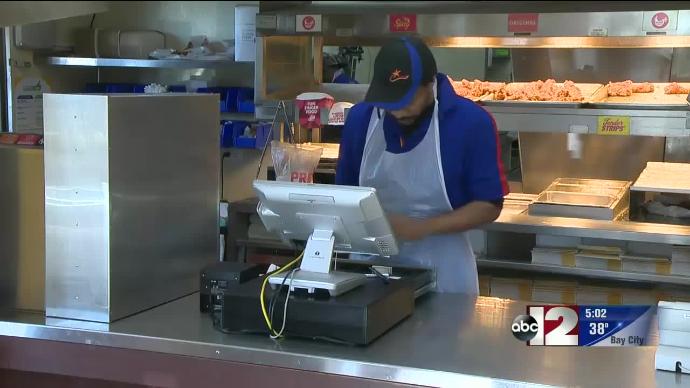 Flint (WJRT) (1/2/17) – Thousands of workers around the state got a pay raise January 1. The minimum wage increased by 40 cents to $8.90 an hour. A full-time worker will earn $16 more a week. But if you’re the owner of a small business, it could hurt the bottom line.

When you’re earning the minimum wage, chances are the household budget is very tight and a slightly bigger pay check is appreciated.

“Every little dollar to me, it helps,” said Alvin Hamlin, who works at Church’s Chicken in Flint.

But for small business owners who operate on a razor thin margin, the wage increase will make it harder to turn a profit.

“What I see is going to happen in they’re going to cut down on labor. They’re going to raise the price of goods. It just affect everybody,” said Joe Kim, owner of three Church’s Chicken franchises in Flint.

And Kim says the unemployment rate may go up because businesses may have to layoff workers to meet payroll.

“I think that the minimum wage going up in this city is going to be very hard for the people that are unemployed to have more jobs. How are they going to survive?” said Kim.

He and others would like to see a sliding scale where large corporations would have to pay a higher minimum wage than small companies.

“The higher minimum wage should apply to all those big businesses and corporations that can afford it,” said Kim.

“McDonald’s and Wal-mart, they should pay more because they have big corporations and they make way more money,” Hamlin said.

In 2018, the minimum wage in Michigan will jump to $9.25 and will be adjusted for inflation after that.